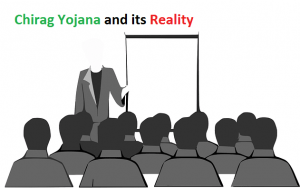 What is Chirag Yojana?

In this scheme, the Haryana State Government will charge 500 INR per month from the student who will study in Govt. Aid schOnOn the other hand, Govt will pay rs 1100 per month for the students admitted to Public School. This scheme will apply to the student who belongs to a family whose yearly earning is 1 lakh 80 thousand IRupeesRuppes.

Is the Chirag Scheme Launched?

No, it has been s not launched or officially announced. Even it did not make any clear statement. People have seen an article in the Dainik Jagaran Vaskar newspaper. And made it controversial, and people commented-

Free and Compulsory education for 6 to 14 years children was introduced as the Right to Education (RTE) Act, 2009. The Government must educate children of this group free of cost. As Chirag Yojana has not been launched, we are unclear whether the scheme will apply to which classes? So, no one can not be told that it will oppose the Free and Compulsory Education Act.

Is it intended to promote privatization?

May ber may not be 100% sure about this because e does not have enough official information or statement about the scheme if it is launched for the child of a family group earning less than 1.8 lakh per year. Very few people will be into this scheme. As per the report, an average of 53,610 INR earns 53% of the adult population yearly. So, it’s clear that most peoples are out of the scheme.

Not only in India but most of the Advanced and developing fellow citizens are also employed in this great profession. In India, becoming a Govt Schools teacher is the craziest thing. If netizens’ comments become true, the opportunity for Teaching posts in the Government sector will decrease significantly.

The Poor will be deprived of education.

If the scheme applies to the family whose earnings are very low, they will have trouble in education and, later on, some other growth like socio-economy. And that will make trouble the nation.

As it is not launched and given any clear statement. So, we can not make any imaginations of its vision and future effects. We hope that the Government will think about the nation’s future to make its advances. And they will not take any step which can cause trouble for a beautiful nation. Otherwise, our awakened people will force to rethink and implement the better.

If you have a query or suggestions to the Olympe regarding the Chirag Yojana, comment below.